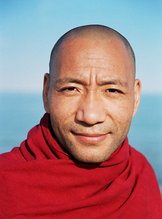 Lobsang Dakpa is educated in Tibetan Buddhism, within the Mahayana tradition.

From 1982-1990 he studied with his Master Lama Gawla, which is located in the village of Lungkya Monastery, in the Tibet part of Himalaya hills. Here he learned six Naropa yogas. He also practised the highest yoga tantra of Kalachakra and completed a one year education practising the highest yoga tantra of Cakrasamvara. He was also given education in massage by his teacher Lama Gawla.

From 1991-2006 he was educated at His Holiness Dalai Lama's monastry in Dharamsala, were he studied Buddhist philosophy and mental wisdom. He completed the earth ritual preliminary to the rite of highest yoga Tantra section of great exposition of secret mantra.

Here you can see my schedule.